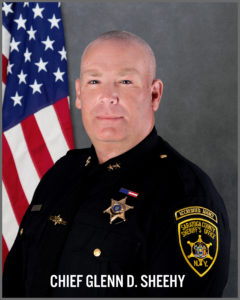 Chief Sheehy was born in Troy and moved to Saratoga County at the age of 5. He graduated from Shenendehowa high school in 1987. Upon graduating he enlisted in the United States Marine Corps. Chief Sheehy attended Fulton-Montgomery Community College and Adirondack Community College before starting with the Sheriff’s Office in 1998. He was promoted by Sheriff Bowen in 2006 to the rank of Sergeant and then again to the rank of Lieutenant by Sheriff Zurlo in 2014. He is currently the Team Commander of the Sheriff’s Special Operations Team.

He enjoys riding his motorcycle and camping with his family.

Chief Sheehy will now oversee the Law Enforcement division of the Sheriff’s Office.