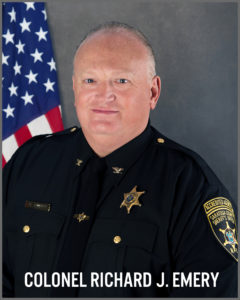 Richard J. Emery was appointed by then Sheriff James D. Bowen as Corrections Administrator, February 1998. His thirty-five years of law enforcement experience include twenty-nine years in a supervisory role. Colonel Emery began his career with the Montgomery County Sheriff’s Office in 1983, rising to the rank of Lieutenant. As a Lieutenant, he supervised the Corrections Division and also served on the Road Patrol. He was a member of the Sheriff’s Office Emergency Response Team and was leader of the Scuba Unit. During his tenure with the Saratoga County Sheriff’s Office, Colonel Emery has served as the Corrections Division Administrator. Colonel Emery is also the leader of the Scuba Unit. The Colonel has completed numerous law enforcement and corrections training schools and courses.